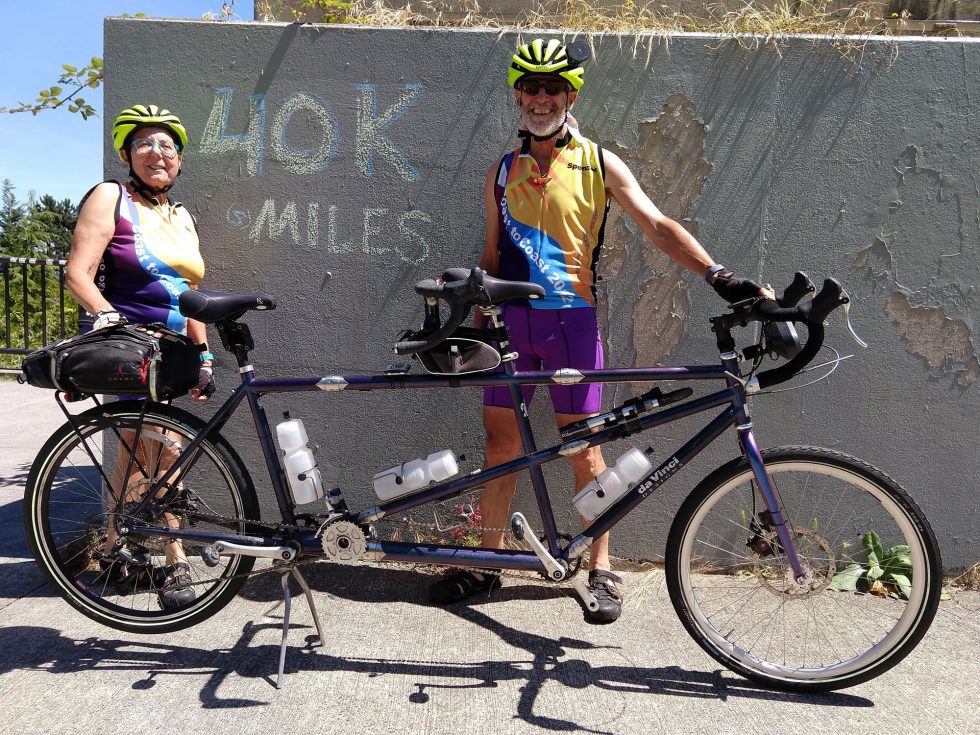 Due to a serious single bike accident in 1990 Sheila never rode alone again. In 1999 we began to explore the idea of tandeming, renting a bicycle built for two and buying an ill-fitting tandem at a charity auction. It was enough to know we loved tandeming so the next year we bought a locally-built Rodriguez and rode 2000 miles in 2000.

In 2002 we decided we liked traveling with the tandem and longed for a bike we could pack. For tandems, that means you need to have S&S couplings which allow you to break the bike down to a size which fits in airline luggage. Spencer had always been drawn to da Vinci tandems. In fact, we’ve actually coveted one ever since we first saw them at the 2000 Seattle Bike Expo (months after already ordering our Rodriguez). Made in Colorado, the da Vinci is a solidly made bike with an innovative drive train. Instead of locking the captain and stoker together with a timing chain, as every other tandem does, da Vinci developed a new drive set up. They built in an intermediate drive shaft to which separate captain and stoker chains apply power. Those chains are on freewheels so they can independently coast. We upgraded to a new daVinci Global In2ition and never looked back.

Our personal blog at S2Cycle.com chronicles our tandem adventures including the STP (Seattle to Portland in one day) and RAMROD (Ride Around Mt. Rainier), Banff-Jasper (shown above), Hawaii, an Erickson Tour in France among others. In 2001 we helped form the Evergreen Tandem Club and in 2004 we organized the Northwest Tandem Rally in our area. Of special note is our cross country tour in 2012.

We celebrated 40K miles tandeming in the spring of 2020, all but 5K of it on our da Vinci. Then, unexpectedly, we had an accident that totaled our bike. Fortunately we were not hurt. Having turned 68 and 71 respectively this year, it was time to trade in the couplings for an electric assist. We’re patiently awaiting our new Tailwind II and have NO doubts we’ll love it as much or even more then our old bike.